Girls’ day out at Rylstone

Once you fill an aeroplane with three females, the prospect of a great day's flying out to the country for lunch with the fourth great mate is probably going to tick the Fun Box fairly quickly.

Stir into that mix a hefty dose of winter fog conditions and some challenging flying and you've got yourself a day that's worth waking up for. It all started with a phone call.

I'd been dying to get out to Rylstone - an absolutely beautifully positioned country airfield near Mudgee on the Central Tablelands of NSW. As we girls were headed out to Mudgee, it would have been plain rude not to call in on the way past. 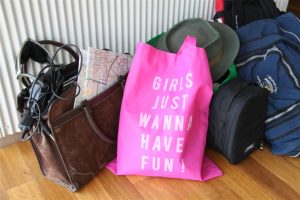 Chief Sitting Bull out at Rylstone is Rob Loneragan, so I set the drums off in search of his whereabouts. "So Rob, do you reckon you might have the billy on around 10 o'clock next Thursday morning?" The drums rumbled back with an unmistakable welcome and promises of oscar-winning cappuccinos for the visiting squaws.

With the fog lifted and all girls finally assembled at Camden, (Lordy, did that take some doing ... there was mega drum activity going down, let me tell you) we cranked up one of Curtis Aviation's beautiful C182s and made a beeline over the ranges for some airwork over Bathurst to tick off the "work" part of the day.

Lucky we weren't planning on calling in for a cuppa with Sal at Bathurst as we arrived overhead and looked down on a solid pea-souper, telling us in no uncertain terms that this little Blue Mountains bolthole was not open for business today.

No matter. There were places to go and people to see. So we just throttled up and headed north into blue skies. Next stop, Rylstone.

Nestled into a picturesque valley that instantly marches that stress level down, Rylstone is a lady in waiting. Rob's plan is to turn his stunning acreage and prime strip-side blocks into a thriving airpark - an aviation sanctuary away from the smog and high prices of city hangarage and real estate nightmares. 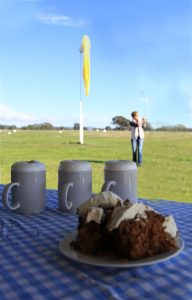 Looking so relaxed it was sickening, Rob & Harriet Loneragan welcomed us warmly to their little slice of paradise as we joined them for smoko in the sun. We bombarded him with a hundred probing questions about his plans for Rylstone, and I realised his long held dream was taking some tangible shape.

The sealed taxiways, access roads and SOLD stickers on the master plan tell the story of solid progress. For me though, it was the FEEL of the place. I loved the surrounding countryside, I loved the grazing cattle and horses over the fence and I was comforted by those long grass runways. I was also impressed with one man's dogged determination to overcome the challenges in giving his dream some clear air.

With gorgeous views out over the valley and distant hills in just about every direction, I can see why people are starting to take serious interest in buying up the blocks for sale out here. We were nearly pulling the cheque books out after half an hour. (I'm just hearing Rossy's reaction to the next bank statement "Oi !! I thought you only called in at Rylstone for a coffee!")

Anyway, lunch with Neva was waiting for us at Mudgee, so with promises of a longer stay next time, we bid farewell to our hosts and climbed out for the ten minute flight to Mudgee, where we had a knockout late lunch at High Valley vineyard, shared a milllion laughs and vowed to do it all again soon. Gotta love a lazy Thursday.