Home of the Outback Hilton 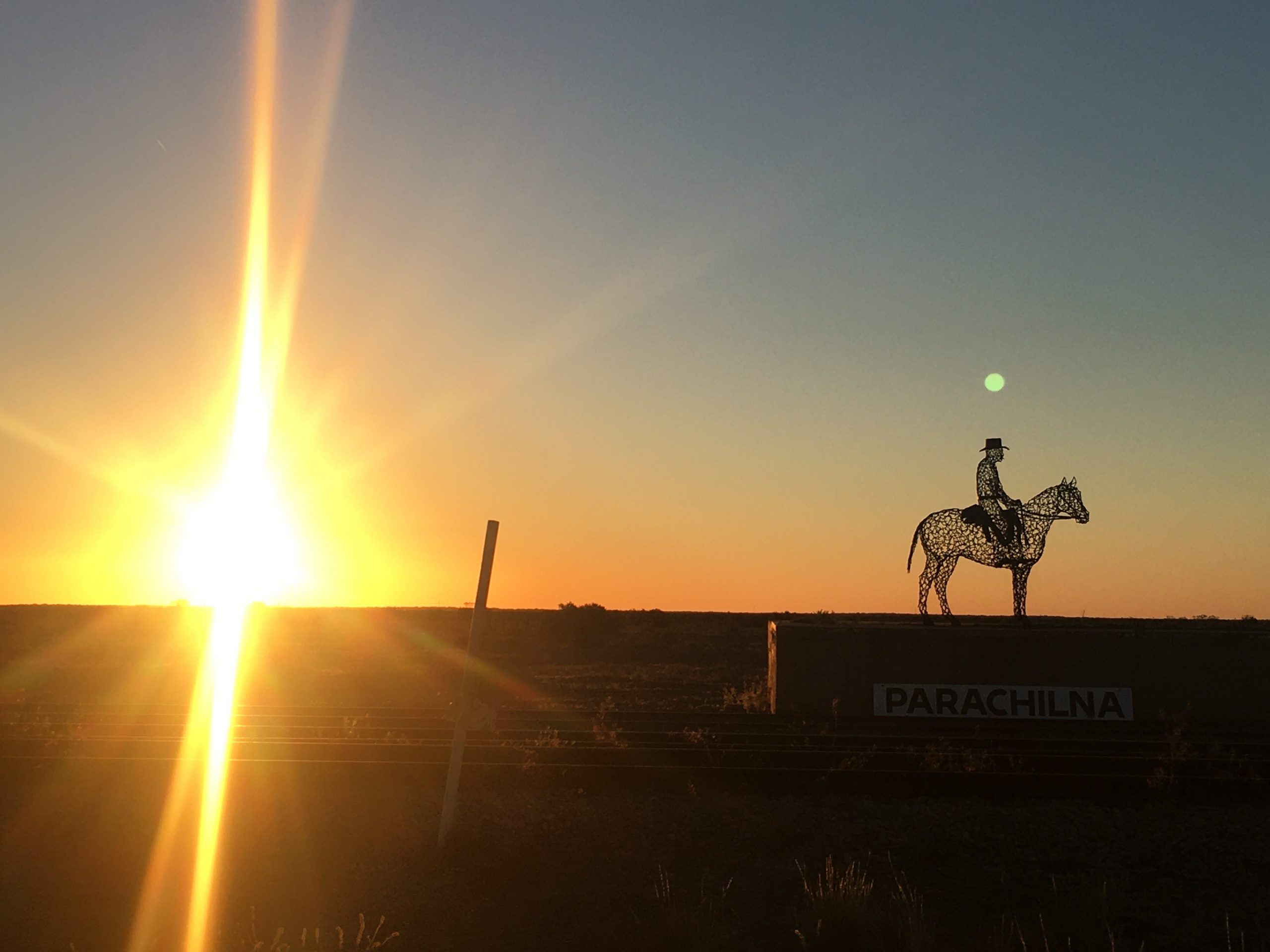 Here's a pub in the outback that's a fantastic blend of grit and gourmet, is easy to fly to, and adds a new reverence to social sundowners.
In my books, if you're going to be flying around our outback, it's my solemn duty to offer some valuable respite from those parched miles in the cockpit. Lord knows you've earned yourself a drink, and there's a chance your passengers may even deserve a meal.

Drop into the Prairie and you'll be offered all of the above - in celebrated style and with a typical South Australian outback welcome. 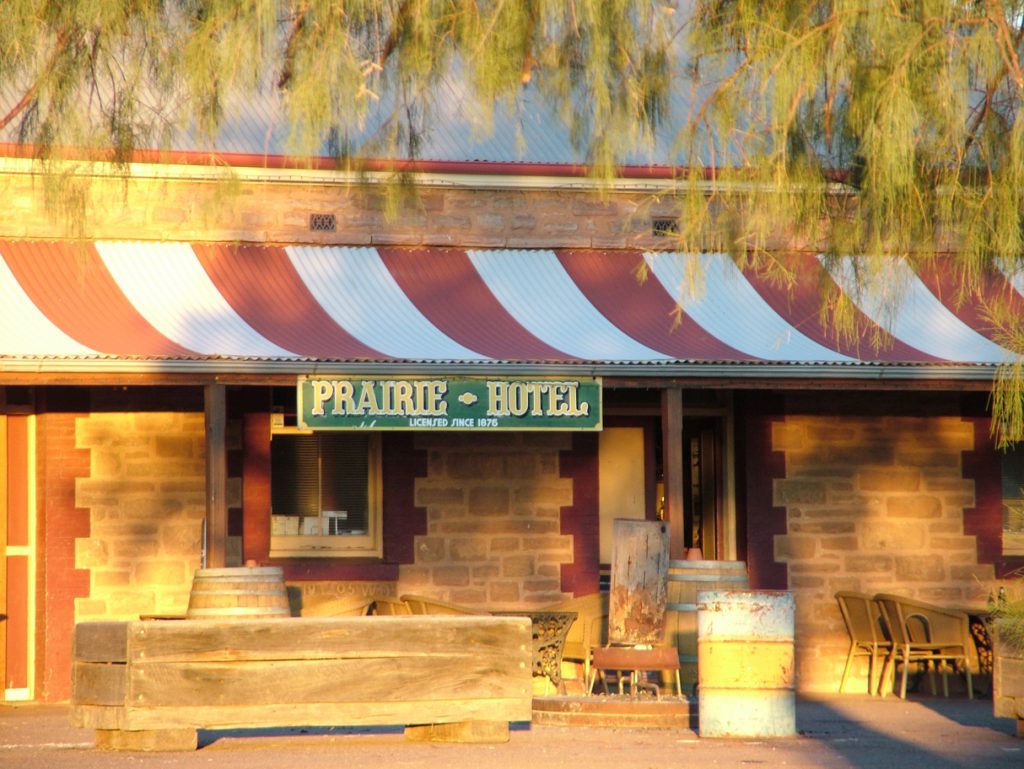 The tiny township of Parachilna lies on the plains just west of the Flinders Ranges in South Australia, about 40nm south of Leigh Creek and within about ten minutes flying time of those wonderful rock formations at Wilpena Pound. It's also an easy flight of about an hour and a half westbound from Broken Hill, our often-used fuel stop.

The booklet you'll find in your room at the Prairie Hotel opens with “Welcome to the remote bush Hilton". Reading further, you'll note that the owner advises there are no TVs nor phones within the hotel, “…a Prairie tactic to flush you out of your rooms and soak up the environment". She signs off with a typical “Is it beer o'clock? See you on the verandah." 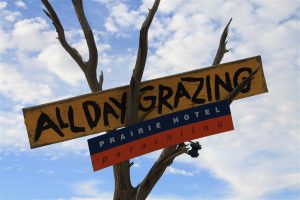 It's one of those places that invariably gets the same reaction: “Parachilna? Where the hell's that?" Surprisingly, this one is not on the predictable air safari track, though after about my seventh visit, I'm staggered it's not.

If you're looking for an outback experience that offers a whole lot more than usual, then may I suggest you get on out here pronto. (Visit the Photo Gallery here.)

I'd first heard about Parachilna years ago when an entire film crew moved in to shoot the feature film Holy Smoke on location out here. Like many settlements in Australia, there's a colourful history attached to this outback gem.

Parachilna has a population of seven, and its beating heart is the Prairie Hotel. That's fortunate really, as there's nothing else out here. As you'll pick up soon enough, life at the Prairie is something you're going to want to get involved with.
Chances are, by the time you arrive, you will have already spoken to the powerball that is Jane Fargher. If not, you will meet her over a commendably city-standard capuccino in the public bar within the first five minutes. (That's if the sun isn't past the yard-arm.) 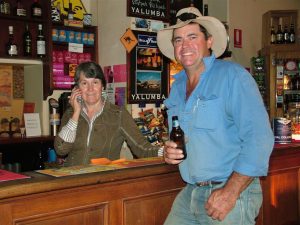 Jane and her husband Ross have owned the Prairie since 1991, when it was little more than a run-down watering hole for a few locals. They live on nearby Nilpena Station, a working sheep station 39kms north-west of Parachilna on the edge of Lake Torrens and which has been been in Ross' family for a couple of generations.

Nilpena became the focus of some ground-breaking research around 2009 and it has now stamped itself on the map as an internationally significant Ediacaran fossil site. The Prairie conducts Nilpena Fossil Tours if you're interested.

If the Prairie ever had a heyday, the old ‘Para pub' probably hit its straps back in the early part of last century when it stood guard over a scheduled stop on the old Ghan railway line. But since the rerouting of that service, time had not done the pub any favours nor had the promise of a tough battle with the outback lured any more thirsty pastoralists out here. 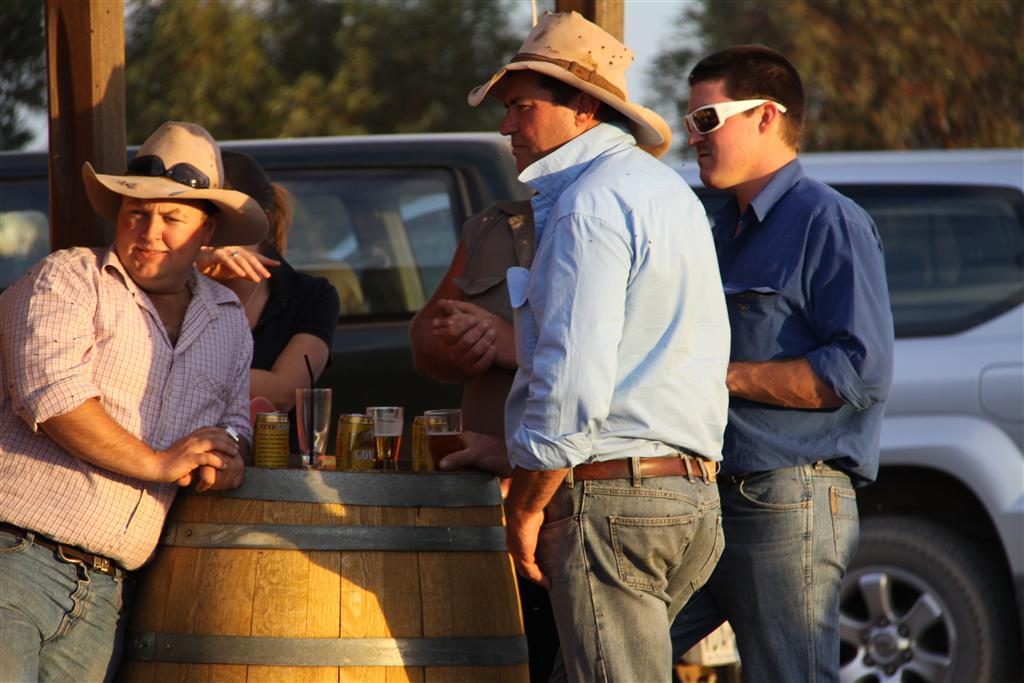 But where everyone else saw ruin, Jane saw only opportunity. An earlier life had seen Jane travelling overseas extensively, absorbing in particular the cultures of Italy and France where she learnt about the importance of good food and hospitality. 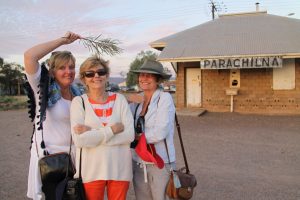 Her vision for the Prairie was to create an oasis of quality service, food and accommodation in this remote stretch of Australia that would attract visitors to the region and give them plenty of reasons to return. She recognised this as a sickeningly expensive dream but it was the catalyst that kept her going through those initially tough years as she was routinely shown the door by the banks, as yet unable to see a profitable future in such a risky venture.

It seems, however, that the more she was told it couldn't work, the harder Jane worked to prove them wrong. Optimism and financial input needed to be at its highest ten years ago when major renovations brought the historic stone building and its environmentally conscious extensions into a new class of sophisticated, deluxe outback accommodation. 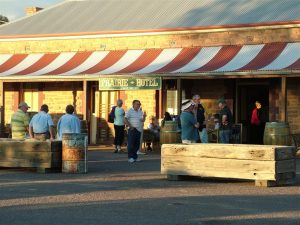 The gamble paid off. They've since held Opera in the Outback out here, art exhibitions, film festivals, huge New Years Eve parties. They'll do Tastes of the Outback inspired banquets, massive weddings in some sublime nook of the Flinders, conference catering and whatever else you can throw at them to organise. 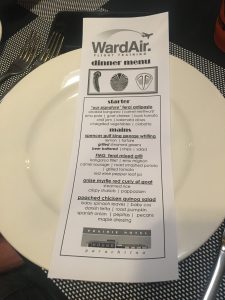 Of course, they also do great tucker for you and me ...  have a look at the uber-cool menu Jane had made up when we called in with a gang of students and pilots on one of our famous WardAir outback trips!

You are categorically not allowed to leave til you've tried the Feral Mixed Grill, the Prairie's trademark dish that highlights a menu infused with the best of the Flinders Ranges local produce and is the result of Jane's years of working with talented indigenous chefs to offer guests a unique experience. 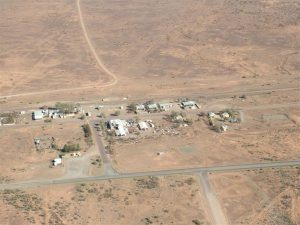 You won't find airstrip details for Parachilna in the ERSA or the AOPA National Airfield Guide. It is listed in the AOPA Pilots Touring Guide, however the strip does not currently meet CASA CAAP specifications. Jane is looking to have the strip approved for an upgrade, but this could take some time.

The old strip is actually a disused service road outside the pub. It is used by local charter pilot Ian Fargher but visiting pilots have the option of landing at nearby Leigh Creek (40nm north), where you can also refuel. There are also strips at Hawker and Blinman. Enquire about transfers when you book at the pub.

There's a great range of accommodation options at the Prairie, from the self-catering budget-priced Overflow to their ultra comfortable deluxe ensuite and Heritage rooms within the hotel. It's all on the Prairie website. 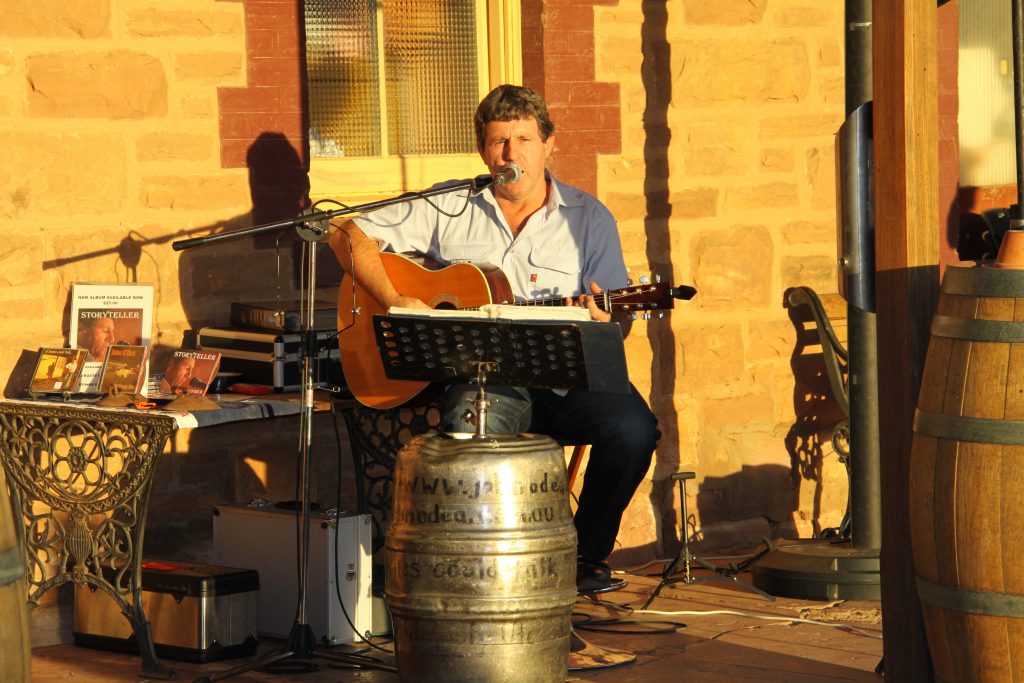 You cannot help but be drawn in by the wonderfully friendly atmosphere that has cemented this pub's reputation with local and overseas visitors. Despite the availability of various 4WD, walking, flying and horseback excursions for guests, you could be forgiven for not venturing further than the front verandah of the pub during your stay.

Travellers stopping in at the Prairie are curiously all very ready for a quenching beverage by the time the sun goes down and there's absolutely no better place to view that sinking golden orb than outside the public bar of this iconic institution. 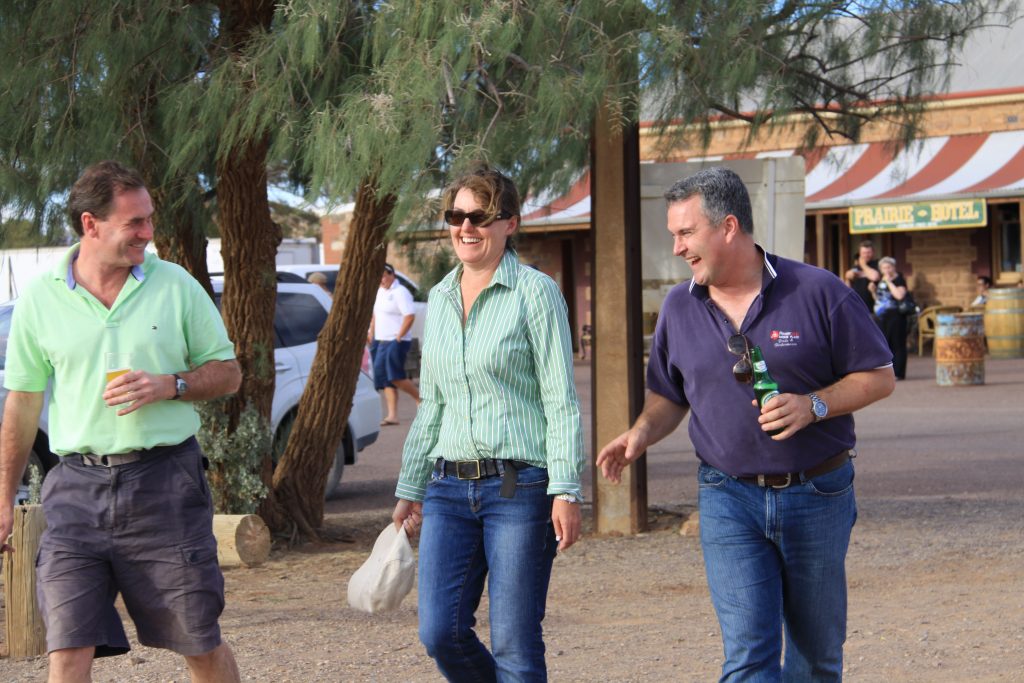 The thing about the Prairie is that you are meeting and sharing stories with such a wide spectrum of people. It may be remote, but it's also on the big sealed highway 470kms north of Adelaide, so it's a popular destination for road travellers up from the big smoke seeking a dose of the outback for a weekend. But this is the outback with a difference; a stylish, comfortable, gourmet difference. 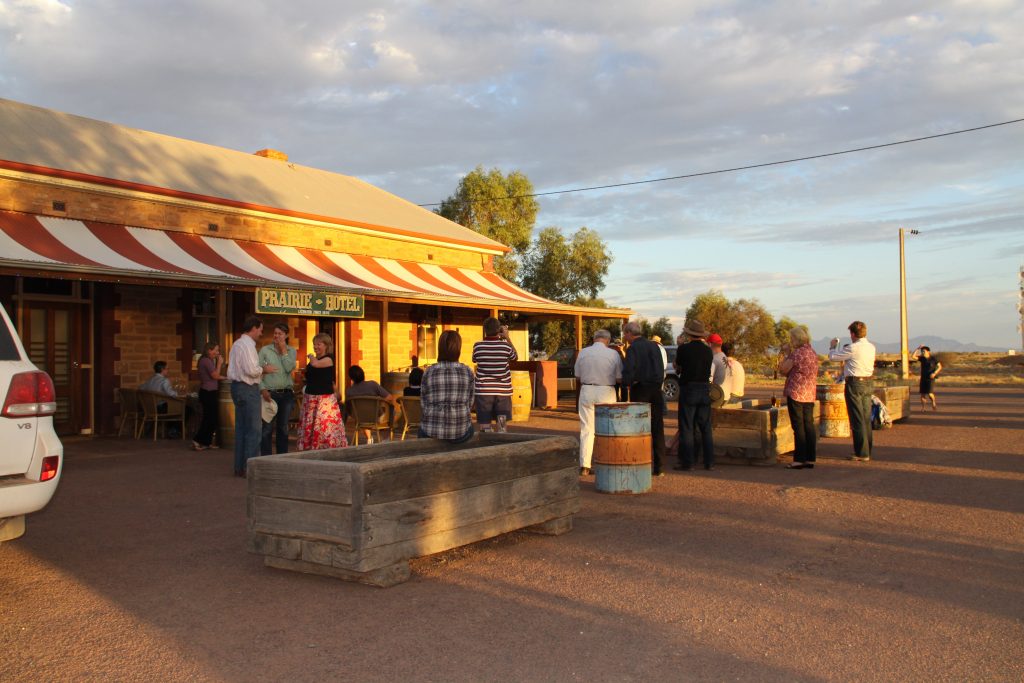 No better place to get that blood pressure down ... come on out to the Prairie.

For a couple of days or even just a lunch-time stopover on your way up to chase down those confused water fowls on Lake Eyre, I highly recommend it. Ross and Jane are the most welcoming of hosts who'll make you feel at home right away.

From Parachilna you can take organised day trips into the desert, into the Brachina and Parachilna Gorges, up mountain ranges, into Blinman, discover ancient art, fossils, colourful wildlife and even more colourful characters.

It might be easier if you just went; then I can stop banging on about it.