A night at the Cracow Pub in south-east Queensland is one you won't forget in a hurry.

Dick Smith flew a few of us in to this outback pub a few years ago, including Macca from ABC Radio's “Australia All Over", for a “quiet" Sunday night, except the locals don't know how to do quiet. 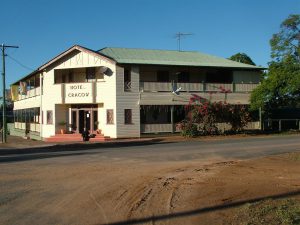 The tiny outback town of Cracow doesn't boast a big population, (I think it's seven) but what it lacks in numbers it makes up for in spirit and that quintessential Australian trait of knowing how to have a good laugh.

We were on our way home from the Old Station Fly-In and Dick wanted to call in and see his good mate, publican Fred Brophy.

Cracow is on the Theodore-Eidsvold road, 485 kilometres north-west of Brisbane, Queensland. The nearest coastal city is Bundaberg. 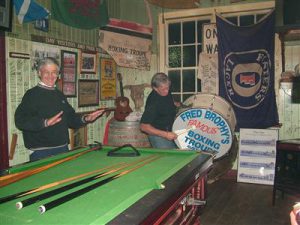 The pub is owned by well-known Australians - Sandy and Fred Brophy.

Fred's name is synonymous with the nostalgic sport of tent boxing, to this day still taking his world famous boxing troupe out to Birdsville every year on the first weekend in September for the Birdsville Races. 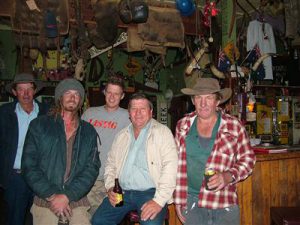 The local boys at the Cracow have dressed up. It's a big night.

The front bar of the pub should keep you amused even before you partake of the dozen Fourex's you're about to down. Once the Brophys have introduced you to the locals and settled you in for the night, you'll be sitting on the receiving end of some pretty memorable outback hospitality.

They're a relaxed lot out here, and chances are they'll want to get to the bottom of just who the hell you are too.

The bar, walls and ceiling are strewn with the usual array of memorabilia from God only knows where but you can rest assured someone will come up with an explanation for most of it if you pose the question. Sticking to the historic truth is very overrated out here, so go with the flow, it all makes for a good story. 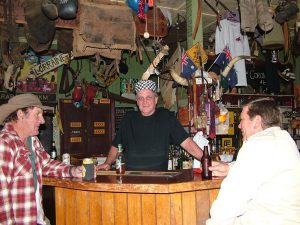 Fred Brophy at home behind the bar of the Cracow

You'll be able to get comfortable accommodation if you decide to stay a night or two, and they deliver an incredibly good feed from the kitchen. Fred was on duty with the chef's hat on the night we called in - bloody wonderful it was, though we didn't need to eat for a week afterwards.

In case you haven't gathered, it's one of my favourite old pubs. And I haven't even touched on the ghost that lives upstairs ...