Sisters, songs and so much more…

Thelma & Louise may have had Brad Pitt in tow, but they didn’t get to meet Jock. Jock’s one of those characters that takes a bit of explaining. He’s profoundly eccentric or mad as a meat-axe, depending on the day.   Jock lives in White Cliffs, underground in a dugout, what can I say.

So, from grit to gourmet, and dust to Drambuie, the girls have now “done” the outback.

Five days flying around western NSW and SA over Easter are over all too soon. My three passengers (my sister Miranda, and great friends Jenny and Jules), have passed their initiation into light aircraft touring with flying colours.

Mind you, it looked a bit dubious there for a while. I’ve always thought the Cessna 182 a roomy and easy aircraft to board, but as I watched two out of three of them climb into the plane totally backwards, getting stuck halfway trying to dislodge a wedged-in foot, then ending up facing the back of the seat they were aiming for, on their knees, I figured this was going to be a long trip. 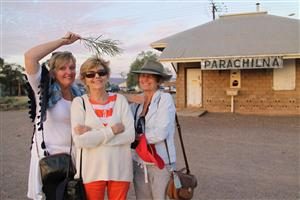 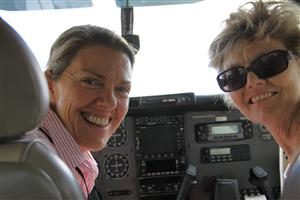 For the first two days we travelled in company with three other air crews - friends of mine from Sydney and Melbourne - so the party was on for young and old.

There were a thousand laughs, great overnight locations, remote dirt airstrips and some incredibly awful singing from Jules at Parachilna. Who's even HEARD of “Pearly Shells” anyway? And what a bargain that she accompanied the performance with heart-felt arm movements to match the lyrics. It was a bit scary for the locals; thank God there’s only four. 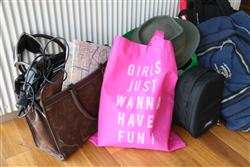 I hadn’t realised how initially fearful Jenny and Jules were of flying, but by the time we’d flown out of the Sydney basin, over the Blue Mountains and were headed out across the farms of the Riverina, I looked behind me to the back seat to see that colour had returned to their faces. I saw nothing but smiles, rapt expressions and thumbs up from the girls. I’d suggest the relaxing of those shoulder muscles was aided by divine intervention and regular doses of in-flight Jaffas, rather than my flying skills, but I’ll work with any credit that comes my way.

Apart from one hell of a rip-roaring dust storm on the first night whilst the planes were all bedded down at Mungo Lodge, we were blessed with cloudless blue skies for the whole five days, and the view from 5000 feet was as memorable as it gets. The girls fell in love with the spectacular theatre that is the Australian landscape. The Darling River in flood, Wilpena Pound from above, Lake Frome dazzling in pink, and a full moon over the Flinders Ranges were just a handful of memories we'll all hold forever.

To my three novice cabin crew – Randi, Jen & Jules – thank you for the privilege of letting me fly you around our outback. I loved it.  For all four of us, the weekend held special meaning – a celebration marking the end of Randi’s battle with Leukaemia over the past three years. She’s emerged fighting fit and roaring to get stuck into life again – Lord help us!  And for those three impossibly difficult years, Jules & Jenny were right by her side – better mates you could never ask for. Thank you. 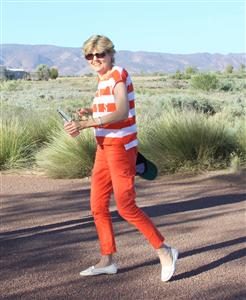 I agree - Randi's got no right looking this healthy. OK - no more sympathy for her!!

Here's what Randi thought:  (Now that she's not marinading in Chemo, she actually makes quite a bit of sense):

"Putting the experience of flying around the outback with Shelley into a few sentences is just not possible. The adjectives alone take up pages – thrilling, educational, hilarious, emotional, the list goes on.

One aspect I loved was the appreciation of how fortunate we are to be living in such a massive, beautiful country. Flying gives you that perspective and the beauty is breathtaking.

Country people’s hardships are magnified as you view the huge expanses of water with roads that simply disappear for miles under brown sludge.

Light aircraft flying also gives you a sense of involvement as even raw recruits help to tie down the wings, hold the avgas pipe and generally get in the way.

Do not even attempt it, though, unless you are travelling with a pilot who is an organised, pedantic planner and who can actually steer as well – we were - and felt confident and secure the whole time." 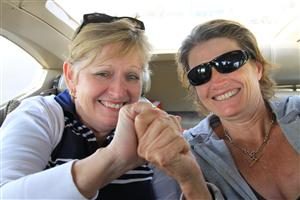 And from Jules (left):

"How to calm your nerves about flying in a single engine plane - travel with a competent pilot and a mad bunch of girls who like to indulge in a glass or two of a good red. (Only give the pilot her allowance.) Scenery is fantastic along the way (even looking down); find a dirt airstrip and somewhere to park your head at night (this part was a little interesting at times. Just had the best time. Thank you Shell."

When I gave Randi a feel of the controls at one stage, all I could hear Jules stammering in the back seat was : 'Oh my God, Randi's in control and she can't fly a plane. Did I tell the kids how much I love them? Jen, give me another lolly. Make it two". 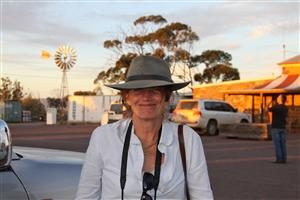 And the final word from my initially petrified passenger, Jenny:

"My lovely friend Miranda told me over a coffee that she was going on an outback flying tour with her little sister Shelley for Easter and my response was 'What an amazing experience for you'. She then added 'I'd like you to share that with us too!'

That created a totally different reaction, arousing all my fears of flying in general and particularly in small planes and an eventual 'Thanks, I'll let you know'. Anyway, of course I had to go on this maybe once-in-a-lifetime opportunity, so the answer was a big YES!

Shelley's confidence and professional demeanour made our adventure a true awakening for me. I was hardly nervous at all ... well maybe a little! The landscape, outback runways, diverse accommodation but most of all the amazing people far outweighed the fear factor. I'm hooked and haven't ruled out a flying lesson for myself! Thanks Shell, we had so much fun."

And here's our route. 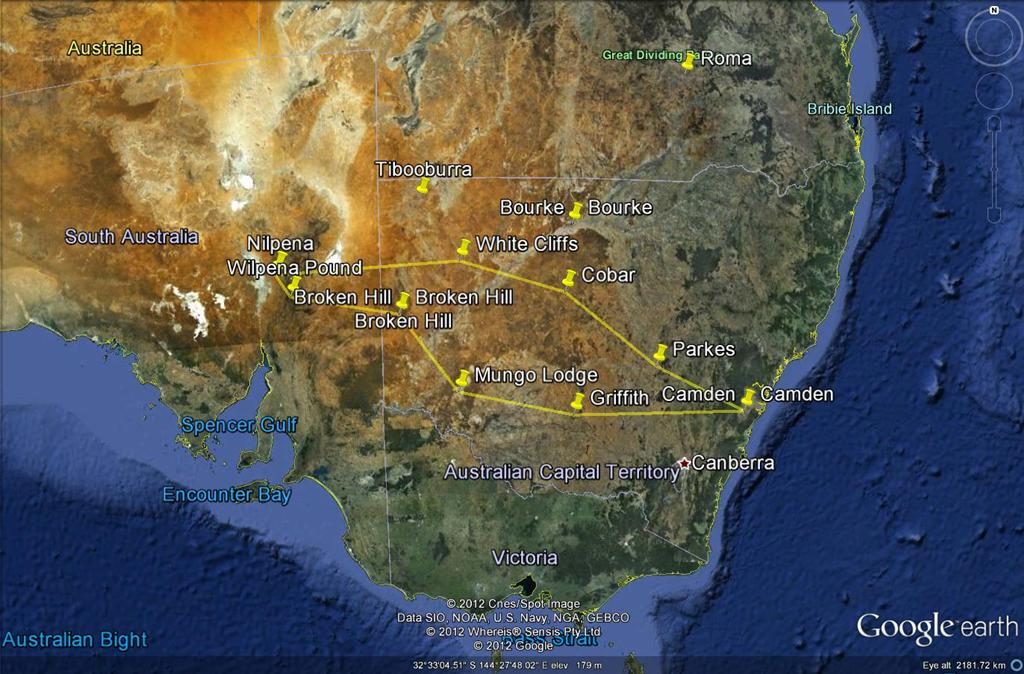 More on the Prairie Hotel at Parachina here if you're curious!