Stepping stones across the Pacific

Flying the Tasman from Sydney to New Zealand in a little fleet of three light aircraft, island hopping via Lord Howe and Norfolk Island … sure beats a day in the office.

It's a flying adventure that may not be on everyone's Bucket List but when all the planets are lining up to make it happen, you'd have to ask yourself why not? In early 2010 I decided it was time to join some fellow adventurers and fly across the Pacific, from Sydney to the north island of NZ.

Our little fleet comprised a new Cirrus SR22 G3, in which I was right-hand seat with the owner flying, a fuel-stacked RV-4 being flown solo by the owner/builder and a Diamond DA40 with owner, Steve and instructor Darren onboard. 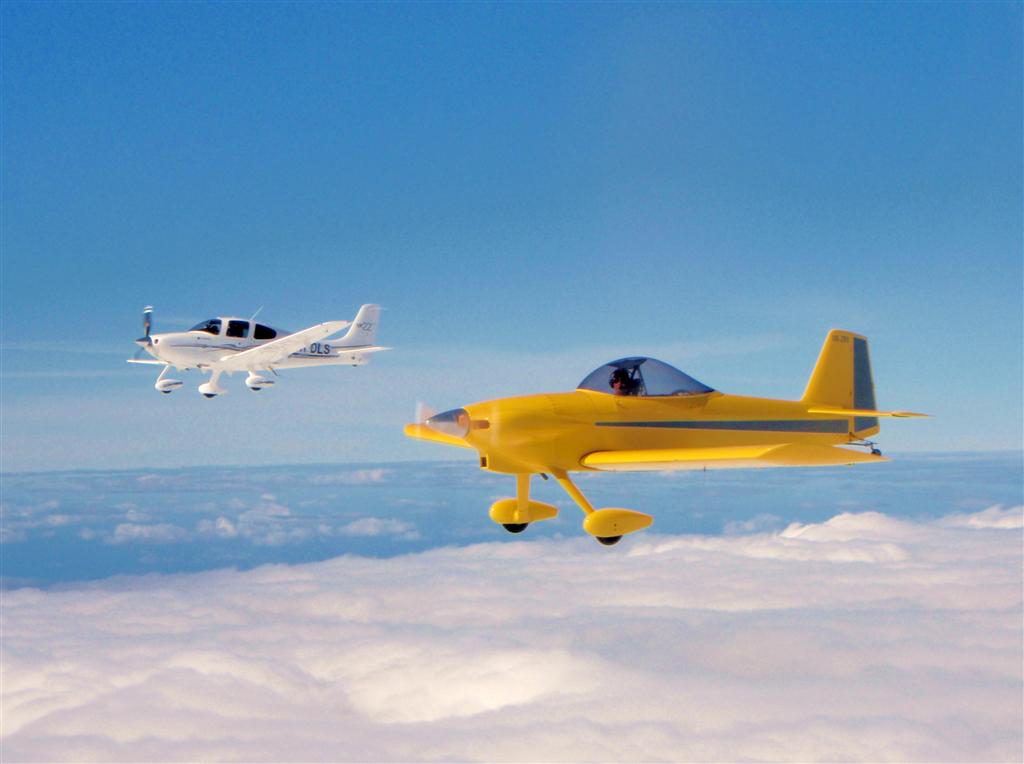 flying across the pacific

After a lot of preparation and research into procedures by the three pilots, we finally assembled in our life jackets at 9,500ft above the Tasman on the way to New Zealand, 216 nautical miles from our beds and a nauseating hike from anything resembling a nice dry airstrip.

This was the half way mark between Bankstown aerodrome and Lord Howe Island. Pretty committed, I'd say. If things were suddenly to turn pear-shaped in the engine department out here, (which I admit was pretty unlikely in this brand new Cirrus we were in) really, what are you going to do about it? If your number's up, your number's up, I say, and all the onboard safety equipment in the world would not prevent that scenario ending in tears, so I embrace my philosophy in life that it's infinitely better to take the dare than die wondering.

Down below, the liquid miles are vanishing behind us as our position on the magic magenta line on the GPS claws ever closer to our first destination of Lord Howe.

In the lead-up to flying across to New Zealand in single-engine light aircraft, the obvious attraction was safety in numbers and now that we were here, all five crew members appreciated the comfort of having the others if not always in sight, then always within radio range.

If you are leaving from Sydney or thereabouts, and your intention is to end up in NZ, the options for your crossing are limited. Conveniently situated approximately one-third and two-thirds of the way across the ocean respectively, the islands of Lord Howe and Norfolk are the only real choices for refuelling, leg-stretching and refocussing. So that was the plan. 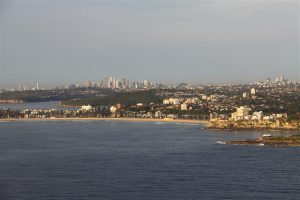 The itinerary was to leave the Sydney coast at around 7am on day one, land for an early lunch and refuelling stop at LHI and get straight back into more flying that afternoon, to get to Norfolk Island by mid afternoon.

The plan was then to spend two nights on Norfolk, giving us a rest day from life jackets, headsets and jellybeans, and an opportunity to look around. Early on the third day, we would fly on to the northern tip of the New Zealand mainland, landing at Kerikeri, just inland from the Bay of Islands and the closest airport that offers Customs and Immigration entry services.

That all worked. We scored good weather and, at 160kts, each leg took a little over three hours so the distance is comfortably achieved in a single day, even if you're cruising at more like 130kts. The first two legs are around 485nm each and the last leg a little shorter. 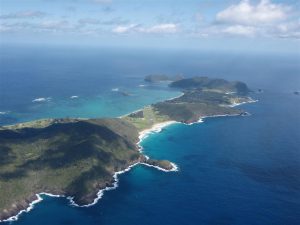 It was late morning when the view out the front finally began to centre on the increasingly familiar and unmistakeable image of Lord Howe. Rising 850 metres out of the sea, the majestic Mt Gower and her smaller side-kick, Mount Lidgbird, began to shape our first glimpse of dry land.

By the time we were circling overhead for some knockout views from every angle, each pilot had received valuable info about the on-ground conditions from LHI Maritime and made the required CTAF calls.

They don't do crowds at Lord Howe so during your stay, you are bound to have many of the tranquil bays, beaches and back roads to yourself. All the water sports that you can think of and that you're so bad at, are available, plus challenging bush treks, fish feeding and reef walking. Check out all the options on the net, starting with www.lordhoweisland.info.

Man of many hats, Andrew McKay, who is the Customs guy and local copper, was extremely friendly and helpful in showing us around the island and dropping us off at a great café in town for lunch. He even organized LHI Maritime Man, Clive, to give us a lift back to the airport. By the way, the landing fee at LHI is $50, cash only.

From my point of view as a passenger as we trekked on across the Pacific, now on our way to Norfolk Island, the over-water viewing held little interest. After all, it's just water. But that's just the point; the best outcome for this particular sortie is a very boring and uneventful crossing.

A word from the pilots 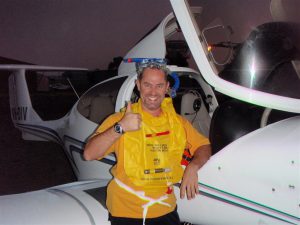 Says Darren Friend, (who's an experienced flying instructor at Curtis Aviation when he takes his snorkel off): “Go for the best avionics you can afford. A G1000 with SVT (Synthetic Vision Technology) like we had in the Diamond sure gives some peace of mind, just in case you pass your PNR (point of no return) and then the weather changes to below VMC or IFR minimas. Definitely use auto-pilot if you've got it, to reduce fatigue, and make sure you know your aircraft's power, pitch and mixture settings to give best range.

“And with a crossing like this," he goes on, “wait out any bad weather. Try not to get sucked into get-there-itis. Before your departure, check early and often re what the weather is likely to be doing at Lord Howe and Norfolk when you get there, and don't underestimate the effect that strong forecast winds could have on your landing.

“If you want to do a scenic around LHI or NF, do it at the end of each leg, as you are at your final destination and can use any excess fuel to tour around and take pics. Don't do it as you depart; you want to leave as much fuel for the over water leg as possible."

Most of the contact numbers you'll need for weather, special procedures, customs requirements etc will be found in the ERSA. Also get in touch with NZ customs (NTCOperationsCentre@customs.govt.nz) and they'll send you the required forms for entry into NZ. Any additional info you need will be on the net.

Hmmm, interesting. You know how they say some destinations suit the newly-weds and others the nearly deads? Well, on first impressions, I thought Norfolk might just squeeze into the latter. Don't get me wrong, it's absolutely beautiful; it's just very ... quiet. (Who in their right mind closes Duty Free shops, in fact all the shops, at midday on a Saturday?) 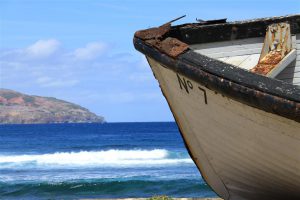 So my suggestion is to dive into the island's history. After a bit of digging, you'll learn that the island is marinading in the legacy of a spicy convict past, to which the passage of time has lent a tangible element of pride for its current residents, who'll all tell you they're direct descendents of the Bounty mutineers.

So hire a car, grab a map and get going. The winding roads all through the hills offer breathtaking views across the island; and you can't turn a corner without being dwarfed by the massive tree ferns and Norfolk pines. After about nine minutes, you'll be automatically doing the special Norfolk one-finger wave thing the locals do when driving past each other. If you can manage that while dodging the cows that call the roads their own, then that'll be a good thing. Apparently it'll cost you something shocking if you misjudge their next move and hit one. 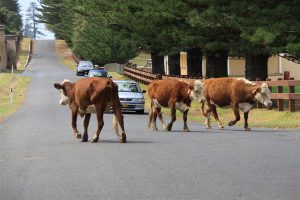 Spend your day working up an appetite for the menu at Norfolk Blue restaurant; nestled in a beautiful tropical setting ten minutes from town and probably the best feed of local beef you'll find on the trip. (That's another good reason to give those meandering prime cuts space on the roads.)

Clamber through the stone ruins of the colonial penal settlement down at the picturesque waterfront town of Kingston; walk out onto the old whaling wharf and don't miss a visit to the first class museum in the Arthur's Vale Historic area. 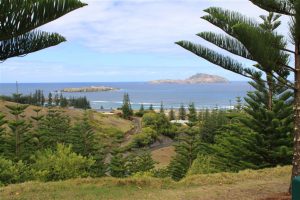 From here, you're on a long final for mainland New Zealand. Brace yourself for the onslaught of Kiwi accents filling your headset, Maori names on the map you've got no hope of pronouncing and the very probable prospect of the Land of the Long White Cloud earning its reputation at some point while you're airborne over her 70% mountainous land mass.

Crossing an ocean from one country to another, with friends on both sides of your aircraft as the miles and the hours tick by, has been a very special experience for this bunch of pilots. It has put to the test a great deal of training in aircraft systems and instrument familiarity, fuel management, weight and balance and performance tables, and the not inconsequential technique of bladder control. It's a fine balance.

Weather will be your biggest variable; give the forecast your utmost scrutiny and make sure you pick up the phone and make use of the on-location contacts in ERSA to help you form a realistic picture of what to expect around the time you'll be arriving. 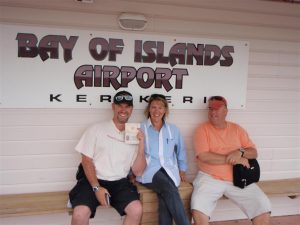 Whether you spend the whole time terrified or relaxed, it's going to be a memorable experience, certainly raising the calibre of entries in the log book. But be prepared; you know the legend goes that your engine is going to run a whole lot rougher over water.