Flying around Broome and Darwin

Here’s a letter from Ron Euler, an Australian pilot who took his wife and daughter on an air safari in their Cessna 182 through north-western Australia. I've included it here, as it gives a good idea about what's in store for you if you're heading up that way.

My family and I have just returned from our Kimberley adventures after being inspired by your article in Australian Flying Magazine (May/June 09) and wanted to say a very big thank you for all your travel tips and suggestions, which made the experience so easy and the scenery unforgettable. A special mention must go to our kind friend Noel Murphy, who was so generous to entrust his beautiful, well appointed 182, CMM , for this trip. 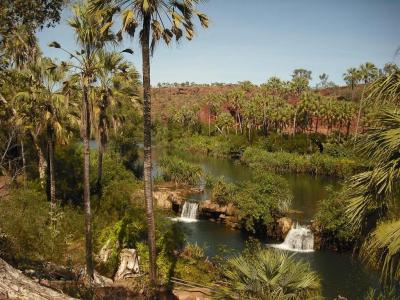 One of the stunning swimming holes at Adels Grove.

Sunday August 2nd was our departure date out of Mackay for an overnight stay at Adel's Grove. We refuelled at Hughenden, however the call out fee at $45 was a bit steep but the service was good.

On arriving at Adels Grove, it was clear that the 12 hundred metre strip was more than adequate and was well maintained. Rod and Michele (the owners of the retreat) looked after us so well at Adels and drove us up to Lawn Hill the next day where we were able to hire one of their three-man canoes for my wife Patty and daughter Kristy (on leave from the UK) and myself. We paddled up both gorges and saw some magnificent scenery. After day one of our flying adventure, we couldn't imagine how we could top this experience. (Read more about Adels Grove here.) 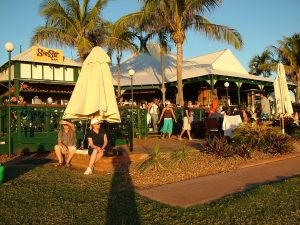 After a nights rest at YTNK, we were up early to head to Broome via the Bungle Bungles and a refuel at Halls Creek. Flying into Broome was breathtaking, with the blue ocean and the white sand of cable beach. Broome radio was most helpful and very professional.

I think we had the last aircraft park and the last motel room in Broome, as the Broome cup was on at the time. We stayed at the Broome Motel which was clean and comfortable and very central to all the attractions. 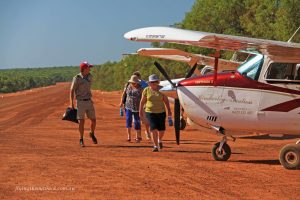 After two days in Broome, and much effort to drag my wife and daughter away from the Paspaly Pearl shop, CMM was off, up the coast at 1500 feet to Cape Leveque, Koolan Island, the Horizontal Waterfall and up to Kurri Bay to the mouth of the Prince Regent River. The Buccaneer Archipelago on the way up was the most stunning coastline imaginable.

The blue ocean and the stark red cliffs, multitude of small islands, not to mention the numerous whales, sharks and some crocodiles, certainly gave us many photo opportunities - so pristine and beautiful. The mining on cockatoo and Koolan island is disappointing to see in such a pristine environment, but I guess that is progress and did not detract from the beautiful surrounding area. Check out more on Cape Leveque. 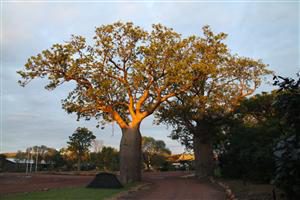 At Prince Regent River, we turned west and followed the gorge to rivers end and on past Drysdale River, to land at the newly opened Home Valley Station, nestled amongst the breathtaking Cockburn Ranges. We stayed in an eco tent for $190 and were well catered for by the friendly staff. The nightly entertainment under the large open air restaurant was certainly a highlight.

After a leisurely breakfast and an unforgettable meeting with the Superintendent of the property, Brett, with his inspirational views on Australian land and culture, we set off to Kununurra for a refuel and on to Darwin for a family gathering. 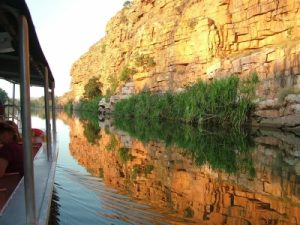 After three days in Darwin, it was time to backtrack to El Questro resort. We tracked direct Kununarra and flew over lake Argyle on the Ord River, down to the Argyle Diamond Mine and onto El Questro . We were number 2 to land, behind a new, 4 seat Jabiru, owned by an ex 747 Qantas captain, Ken Smithwell and his delightful wife Sue. They were great company and we were able to swap notes and tips over happy hour at the resort. We joined together to do the guided tours through El Questro Gorge and Zebedee Springs, with our ranger ‘Keechy ‘, who was most entertaining.

Our accommodation was in a station bungalow which was very comfortable and overlooking a beautiful stream. The Chamberlain breakfast cruise the next morning was breathtaking and exciting, with the fish- feeding a bonus. The accuracy of the Archer Fish with their water spits is incomprehensible. At this stage in the travels, my dear wife decided that due to the lifestyle and surrounding beauty, that was El Questro, she felt like aristocracy and proclaimed her new pseudonym to be ‘Lady Kimberly'.

After two days at El Questro, ‘Lady Kimberly', my daughter and I moved on to Emma Gorge Resort, literally 10 NM over the hill. We took off and flew over the luxurious El Questro Station, down the gorge and then onto YEGR. At 900M, the strip was ok, but has a ski jump at one end. Emma Gorge has luxury tent accommodation, which was very comfortable with ensuits.

A fantastic Chef added to the experience. Emma Gorge was by far the most beautiful, but one should not judge individually as all were fantastic. About 11 am the next day, we had to leave, back to YPKU for fuel and back to Darwin, yet again. Kununurra displayed lush green countryside, which was beautiful from the air.

Three days in Darwin with family and it was sadly time to head for home. Our planned track home was over Kakadu, Jabiru and down to Boorooloola for fuel and then onto Mt Isa. This was our longest day flying, at 6.5hrs. We stayed at the All Seasons Verona Hotel in Mt Isa which placed us in close proximity to the recommended new Buffalo Club, which was excellent for dinner and some live entertainment.

On the morning of the 17th of August , after a good night's rest, we set off for home. Another quick refuel stop at YHUG, tracking direct Mackay. As sad as we were that the trip was over, the Eungella Range and the valley back into Mackay, with the beautiful ocean to welcome us back, made us realise why we love our town.

The 182 did a fantastic job, showing us some of the best views in North West Australia in comfort and style. The endurance and load capacity made planning so easy. By sheer coincidence, a new HF radio was fitted about a month before the trip. (Thanks Noel). This was handy in some of the more remote areas.

Thank you again Shelley for the inspiration to do the trip and all your advice. We are now thinking, where next?