A while ago, I joined a little fleet of five Piper Archers organised by Jonathan Merridew of Lilydale Flying School in the Yarra Valley,  to do a three-day island-hopper around Bass Strait for a story I was researching for Australian Flying. It was a little strange driving an Archer after so many years in the C182, but that was the least of my worries as we all copped a robust dose of those reliable Roaring Forties as we crossed the Strait back and forth.  Here's what the route looked like. 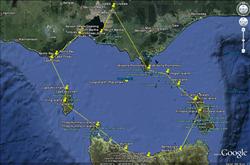 A brilliant way to spend a long weekend 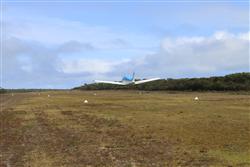 Leaving from Lilydale Airport where I was delighted to be able to say a quick hello to a couple of AWPA girls (Australian Women Pilots Association) Neroli Merridew and Delia Jones, we flew across to King Island for lunch, then onto Three Hummock Island for the night. Next day, we refuelled at Wynyard then called in to Barnbougle Dunes Golf Links on the north east of Tassie for lunch, before overnighting on Flinders Island and home next day. Three days, 13 people, countless highlights. 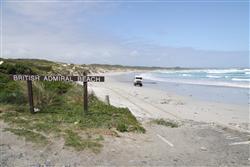 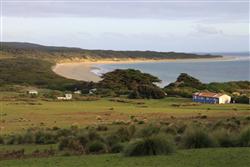 Three Hummock Island has two people living on it - John & Bev O’Brien, the managers of the guesthouse at the beach. The rest of the residents have fur, wings or joeys. The property is home to untold numbers of wallabies, Cape Barren Geese, chooks, and doubtless assorted slithery critters I’m glad I didn’t see. Probably the most isolated and remote situation I've ever come across. Bev had vegetables in her vege patch I'd never even heard of and was the owner of a very serious freezer in their kitchen. They adore their life (and each other, clearly!) Highly recommended for a fly-away; the beach house sleeps 12 comfortably and you’ll feel as though you’re the only people on the planet. 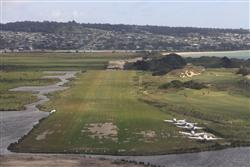 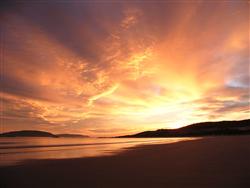 Palana, at the top of Flinders, where we stayed on the second night, has a population of one, but Daryl, the owner of Palana Retreat, rounded up a couple of locals from nearby farms to make a bit more noise with us the night we spent there. Beautiful, untouched beaches, incredible meal at JJs On the Bay at nearby Killiecrankie; this is a place where you can be as busy or as chilled as you like. All the ALA’s we landed at were typical bush strips, some a bit rough in places, but all plenty long enough and presented no real dramas.

Flying along the north coast of Tasmania and then up the west coast of Flinders Island was absolutely postcard viewing the entire way. It reminded me just how fortunate we are to be able to uncover such remote and awesome landscapes so very close to major capital cities like Melbourne and Hobart. What a great area to visit in Summer. Now I’m dying to go further, and investigate Freycinet Peninsula, St Helens, Bay of Fires ..... so many dreams ...